How To Select A Conductivity Meter

The conductivity of a liquid:

Electricity conductance is dependent on the number of free ions, called charged particles. The more free ions in the solution, the higher the conductivity. For example, a solution of table salt dissolved in water is a high conductive solution. The particles of table salt (NaCl) will completely dissociate into Na and Cl atoms which produce a highly ionized solution with relatively high conductivity.

The idea of measuring conductivity is dependent on Ohm’s law. In its simplest form, two plates (electrodes) are placed on the solution with a specified alternating potential between them and measuring the resulting voltage through sensors within the sample. 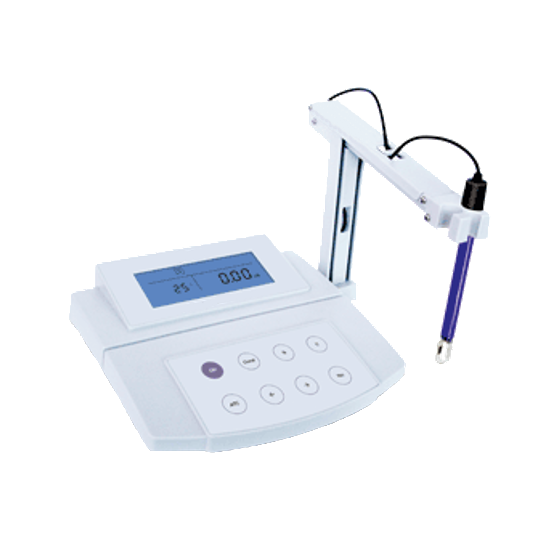 The most traditional type of cell, an alternating current is applied between the poles of two parallel electrodes. Using sensors, the resulting voltage is measured, and the conductivity is calculated. However, the polarization effect causes the electrodes’ resistance to interfere in the calculations, which sometimes might decrease the reading accuracy.

This type is not so popular, as it has been replaced with the 4 pole cell model. This type provides a better reproducibility through determining the cell constants. Some problems that might arise while measuring are the volume of the testing beaker and position of the cell in the beaker, which is explained as the field effect. The advantage of this design depends on the third pole, which is linked to the first one allowing the produced field lines to optimize guidance and confinement without being affected by other conditions.

This type of cell consists of 4 electrodes. Two inner cells (2 and 3) and two outer cells (1 and 4), the two inner electrodes are not polarized. An alternating current is applied between the outer cells, and a constant potential difference is applied between the inner cells with a negligible current. Thus, the conductivity would be directly proportional to the applied current. The 4 pole cell’s purpose is to minimize the beaker field effect, leading to more accurate readings.

One of the main factors that decrease the reading accuracy is the polarization effect. To minimize the effect, the cell poles are covered with a layer of platinum black. However, when dealing with platinized cells, once scratched, the cell constant will change, resulting in a non-accurate reading. Also, frequent calibration should be taken into consideration while using these cells.

Two metallic coils are immersed in a plastic body called the drive and the receive coil. An alternating current is applied to the drive coil, which induces a voltage in the solution surrounding the coil. The current received by the receive coil indicates the solution’s conductivity. This model is very beneficial in liquids with high levels of suspended solids and ideal for liquids with high conductivity.

To Consider While Measuring

When dealing with 2 poles cell, cable resistance must be taken into consideration as the length of the electrode can induce cable resistance that might lead to an error in reading. The cable resistance effect is evident in high conductivity solutions. On the other hand, cable capacitance should be considered in all types of cells as it might cause a reading error, especially in the low conductive solutions or when applying a voltage with high frequency.

A layer of ions may form around the electrodes when applying an electrical current in a solution. This results in an additional resistance and capacitance added, which might lead to a reading error. To overcome this, a higher frequency current is applied, making the cable resistance higher than the solution’s resistance. This effect should not be taken into consideration in the 4 poles cell.

The geometry of the beaker and cell constant represents the area of the electrical field used for measuring the conductivity effect, the conductivity reading due to the field-effect (the part of the magnetic field that leaks outside the measuring geometric area). To overcome this type of error, a cell calibration should be held either manually or automatically within the meters.

The poles’ surface might be exposed to chemical or mechanical treatment after usage, which leads to different geometry and cell constant, leading to inaccurate results. Therefore, a regular calibration should be done to the cells, which we provide either manually or automatically.