This portable Flaw Detector with Transducer Calibration (Li Battery) can quickly, and accurately inspect and evaluate flaw location for a range of scanning up to 393.7 in (10000 mm) and diagnose various defects in a workpiece.

GAOTek Flaw Detector with Transducer Calibration (Li Battery) is a portable, non-destructive flaw detector which can quickly, easily and accurately inspect, locate, evaluate and diagnose various defects (crack, inclusion and pinhole, etc.) in a workpiece for a range of scanning: 0-393.7 in (0-10000 mm), in a lab or field, without destruction. This device can be used extensively in any field that needs defect inspection and quality controlling e.g. manufacturing industry, iron & steel metallurgical industry, metalworking, chemical industry, etc.; moreover, it can also be broadly used in the active safety inspection and service-life evaluation such as aerospace, railway transportation and boiler pressure vessels. It is an essential instrument for non-destructive inspection industry.

Designation of the instrument’s components

Keys of the instrument are included in three groups: Function group, usual key group and special function group. There are 6 keys in Functional group, in which F1, F2, F3, F4, F5 are corresponding with the 5 functional groups on screen, and the key <> is used for switching of pages; Usual key group comprises 9 keys: Up, down, dB+, dB-,+, －, gain step key

Proper probe shall be connected when using the instrument for inspection. The probe connector for this instrument is BNC.

a. Get the job ready;

b. Insert the probe plug into the probe socket of the host, rotate tightly the locking nut;

, turn on the instrument;

d. It will carry out self-test

e. Check the voltage of the battery; if the power monitor shows that the voltage is low, it  will  turn  off automatically 1 min after alarming bell

f. According to your application Ten independence setups can be applied, any criterion can be input freely, we can work in the scene without test block. Whether it needs to calibrate the instrument, if yes, ask a professional technician to calibrate it (refer to chapter IV);

i. Turn off the instrument. 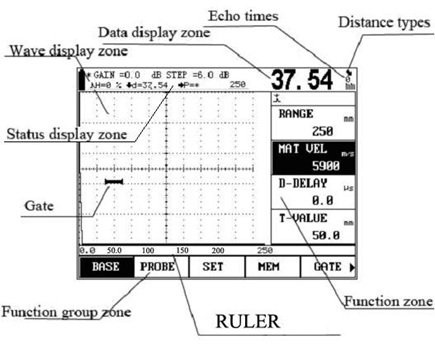 Three Display Modes of the Screen 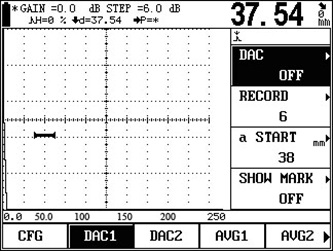 You can activate Enlarge mode by

. The gain and selected dB step value will be always displayed on the screen. And at the same time, all other functions are locked. 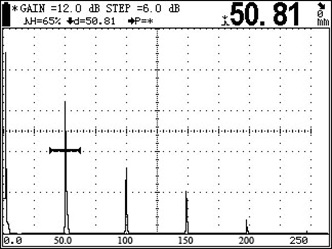 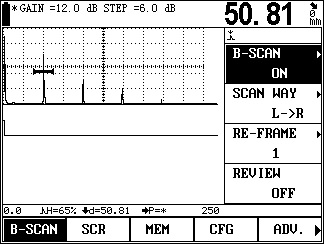 Description about symbols displayed on screen

When the angle of probe is not zero and the measured echo is multi-echo, the echo times will be displayed on the status column as follows

Description of other symbols

There some other symbols above functional menu, Freeze and Communication symbol is beside the battery status symbol.

Overview of All Functions

The functions of this instrument are included in 15 functional groups and several special functions.

Other special functions can be realized by Special Function (SF) keys.

You can select a functional group by <Fn> key; select certain function by <Menu> key and

; at this time, you can modify parameters of this current menu by Coder And for some functional menus, they are shared by two functions, when you have selected such a function, by pressing

or the corresponding <Menu> key, it can be shifted to another function.

In some cases, a functional item has two functions. Thus, they can be shifted by pressing down the press “↑” or “↓” key again or striking

key. The symbol “>” displayed behind the function name means that it is a multipurpose function item.

Rough and Fine Adjustment of Functions

For some functions, rough and fine adjustment are available. By pressing down the corresponding

key, you can shift between these two adjusting modes. With a symbol “*” in front of the function item that means it is in fine adjustment mode.

The following are the functional items with optional rough and fine adjustment.

Calibrating the Instrument and Measuring

MTLVEL is unknown, set the approximate MTLVEL as 5920 m/s, set the Gate Logic as double gate mode, meanwhile set the P delay as 0;

Calibration of incidence angle (X-Value): Test the probe zero point with || W test block (Holland test block) or CSK – | A test block, firstly adjust the sound speed to 3230 m/s, detecting range 150 mm, then start testing, locate the probe on test block and move it to make sure you have got the highest echo on R100 mm reflector, measure the distance, which is the X-Value of probe, between the front face of probe and cycle center of R100 m arc. The point corresponding to the cycle center of R100 mm arc is just the incidence point of probe.

When the focus on angle menu

key, we can input L value, and then press

key again, the unit will calculate the angle value.

Angle beam probe can be calibrated in many ways, not only by standard test blocks, it can also be done with a thickness known hole, theoretically, smaller of the reference reflector more accurate calibration you will get, however, it will be more difficult to do so. When calibrating with holes, we can do the calibration on angle by working out slope through measuring the depth and level position of hole, and with which processing the calibration of sound speed and probe zero point.

DAC curve is used for distinguishing the reflectors with the same size and different distance. Normally, in workpiece, reflectors with the same size and different distance cause change in amplitude because of the attenuation of material and pervasion of beam. The DAC curve compensate for attenuation of material, magnetic field influence, pervasion of beam and surface smoothness in the way of graph. Normally, the echo peak points are all located in the same DAC curve. And in the same way, the echo created by smaller reflectors will be located under this DAC curve, and the bigger one will be above the curve. 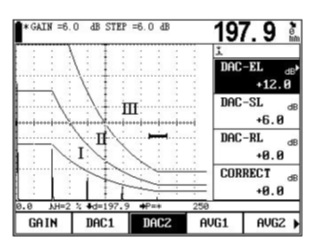 To use the detector for measuring, carry out the following works: Set the start of gate, gate width, gate threshold and gate alarming way.

Contents of measurement are:

x:      Distance of ultrasonic source to the probe’s front edge;

p:      Horizontal distance of the defect from the probe’s front edge;

D:     Is the relative value of defect depth, it is obtained by the following formula:

Communication for the Instrument

voltage, you have to charge the instrument as soon as possible.

The charging way is as follows (you can charge either with the instrument on or off):

There are no reviews yet. 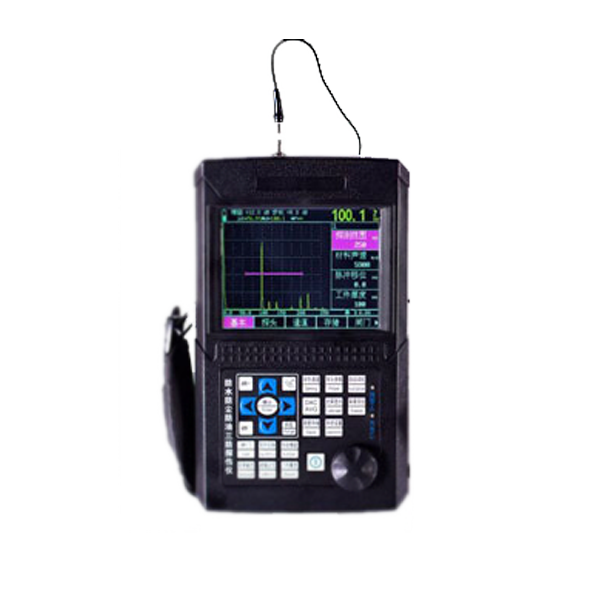