GAOTek Mixed Signal Oscilloscope (Bandwidth 100 MHz, Sample rate 2 GS/s, Channel 2+1/LA 16) combines the functions of digital storage oscilloscope and logic analyzer with real time sampling rate upto 2 GS/s. This oscilloscope has an auto-scale function and built-in FFT function and supports a USB for data transmission to a PC.  This instrument features a color liquid crystal display of high resolution and high contrast with adjustable back light and a multiple language user interface. The logic analyzer has 16 input channels with 4 M maximum storage for each channel. It allows convenient data measurement and data search with free setting of all kinds of threshold levels.

Introduction to the Front Panel and the User Interface

This mixed oscilloscope offers a simple front panel with distinct functions to users for their completing some basic operations, in which the knobs and function push buttons are included. The knobs have the functions similar to other oscilloscopes. The 5 buttons in the column on the right side of the display screen are menu selection buttons (defined as F1 to F5 from top to bottom respectively), through which, you can set the different options for the current menu. The other push buttons are function buttons, through which, you can enter different function menus or obtain a specific function application directly. 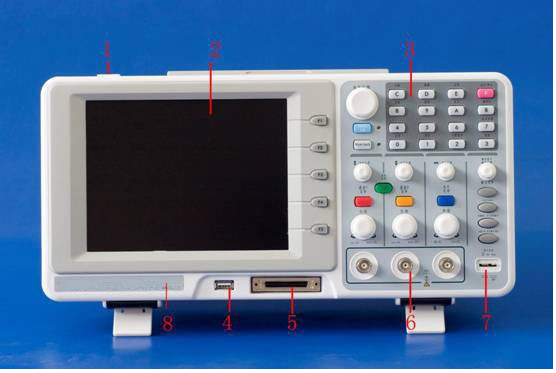 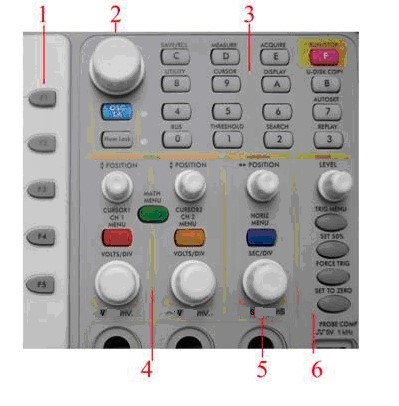 How to implement the Function Inspection

Make a fast function check to verify the normal operation of the instrument, according to the following steps: 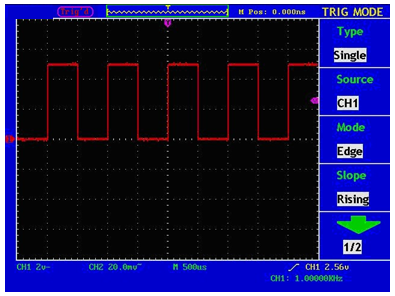 How to Implement the Probe Compensation

For adjusting the probe compensation, please carry out the following steps:

How to Set the Probe Attenuation Coefficient

How to Use the Probe Safely

The safety guard ring around the probe body protects your finger against the electric shock, shown in Figure.

Warning: In order to avoid suffering from the electric shock, please keep your finger behind the safety guard ring of the probe body during the operation. In order to protect you from suffering from the electric shock during your using the probe, do not touch the metal part of the probe tip when the probe is connected to the power supply. Before making any measurements, please connect the probe to the instrument and connect the ground terminal to the earth.

How to Implement Auto-calibration

The auto-calibration application can make the oscilloscope reach the optimum condition rapidly to obtain the most accurate measurement value. You can carry out this application program at any time, but when the range of variation of the ambient temperature is up to or over 41 °F (5 °C), this program must be executed. For the performing of the self-calibration, all probes or wires should be disconnected with the input connector first. Then, press the “8(UTILITY)” button to call out the FUNCTION menu; push down the F3 menu selection button to choose the option ” Do Self Cal”; finally, run the program after confirming that everything is ready now.

Introduction to the Vertical System

Shown in figure, there are a series of buttons and knobs in VERTICAL CONTROLS. The following practices will gradually direct you to be familiar with the using of the vertical setting. 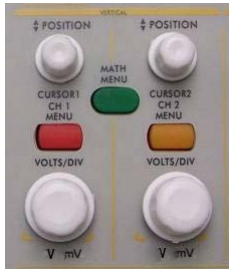 Introduction to the Horizontal System

Shown in figure, there are a button and two knobs in the “HORIZONTAL CONTROLS”. The following practices will gradually direct you to be familiar with the setting of horizontal time base.

Introduction to the Trigger System

Shown in figure, there are a knob and four buttons in the “TRIGGER CONTROLS”. The following practices will direct you to be familiar with the setting of the trigger system gradually. 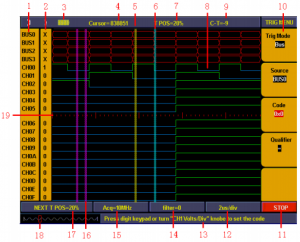 How to Acquire Data

When you start to acquire LA begins sampling data from the probes. Then each time clock occurs the data will be sampled. Then sampled data is sent to trigger function block and store in main memory. The trigger program checks specific events with the sampled data and take specific action. The trigger program can check events as rising edge, data values, and data ranges etc. LA module enables a post trigger delay counter when trigger reach specified value and to allow post trigger portion of the acquisition memory to fill before data acquisition stops. Press “F” to get into data acquisition mode after finish setting for trigger and sampling. Then running status display as “RUN” and running status display “TRIG” when detected trigger signal and display “STOP” when data acquisition finished. Then you can start to analyze data. Data acquisition can be stopped by press “F” again during the process.

How to Observe and Analyze the Data

Follow below steps to observe and analyze the current data acquired: 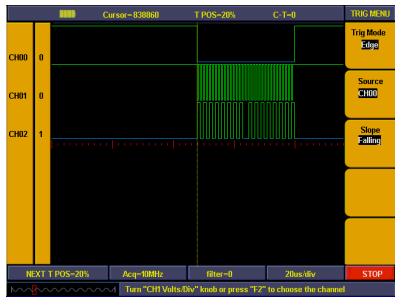 The waveform accuracy reverts from sample data depend on sample rate for measured signals. The waveform reverted in LA is referring to the sample signals storage in the memory. The recorded data will display in error if the sample rate is too low.

There is an importance compromise between recorded signal resolution and its continuance (relate to time). The sample memory depth of LA is fixed and once adding sample rate then resolution will get better accordingly. But it will decrease the continuance for acquire signal. In a word, if the sample rate is quicker, the continuance for recorded signal will get smaller but with better resolution. Sampling system can set difference sample rate and storage depth. We use 10 times sampling rate to measure the signal clock frequency of 1 M, and storage depth set as “Normal”.

Sampling system setting steps as below:

How to Set the Vertical System

The VERTICAL CONTROLS include three menu buttons such as CH1 MENU, CH2 MENU and MATH MENU, and four knobs such as VERTICAL POSITION, VOLTS/DIV (one group for each of the two channels).

Setting of CH1 and CH2

Every channel has an independent vertical menu and each item is set respectively based on the channel. With the “CH1 MENU” or “CH2 MENU” menu button pushed down, the system shows the operation menu of the corresponding channel. By pressing F1, F2, F3, F4 etc., you can change and select the settings.

The following table explains more details of these function and settings.

A square waveform is used as an input in this example.

Taking the Channel 1 for example, the operation steps are shown as below:

Taking the Channel 1 for example, the operation steps are shown as below:

Note: In FFT mode, both CH1 and CH2 are not allowed to be ON when F3 is pressed.

Regulate the Attenuation Ratio of the Probe 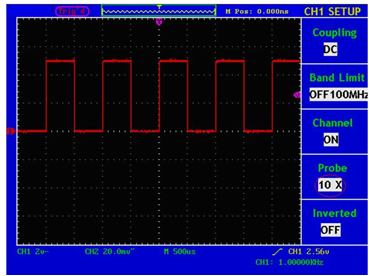 A List of the Attenuation Coefficient of Probes and the Corresponding Menu Settings:

Wave form Inverted: The displayed signal is turned 180 degrees against the phase of the earth potential. Taking the Channel 1 for example, the operation steps are shown as follows:

How to Set the Horizontal system

How to Set Trigger System

SET TO 50 %: Set the trigger level as the vertical midpoint value of the amplitude of the trigger signal.

FORCE TRIG: It is a force trigger button for the generation of a trigger signal, which is mainly used in the “Normal” and “Single” triggering modes.

SET TO ZERO: Trigger the resetting of the horizontal position.

TRIG MENU: It is a trigger menu button. When it is pressed, an operation menu will be presented in the screen.

Single trigger has four modes: edge trigger, video trigger, pulse trigger and slope trigger.
Edge Trigger: It happens when the trigger input passes through a given level along the set direction.
Video Trigger: Carry out field or line video trigger on the standard video signal.
Pulse Trigger: Use this trigger type to catch pulses with certain pulse width..
Slope Trigger: The oscilloscope begins to trigger according to the signal rising or falling speed.

Trigger signal comes from two vertical channels when alternate trigger is on. This mode is used to observe two unrelated signals. You can choose different trigger modes for different channels. The options are as follows: edge, video, pulse or slope.

How to Operate the Function Menu

How to Implement Sampling Setup

Press the ACQUIRE button and the menu is displayed in the screen, shown as figure.

How to Save and Recall a Wave Form
Press the SAVE/RCL button, you can save and call out the waveforms in the instrument.

A sine wave form input CH1. Follow these steps to save waveform from CH1.

To recall a stored waveform, activate WAVE SAVE menu

Carry out a Self-Calibration

Notes: Disconnect all inputs before carrying out a self-calibration. Fail to do so may cause damage to your oscilloscope.

Here are the procedures for carrying a self-calibration.

How to set Utility

Utility menu as below

In  case  the oscilloscope is still in the black-screen state without any display after the power is switch on, implement the following fault treatment procedure.

After acquiring the signal, carry out the following operations if the wave form of the signal is not displayed in the screen.

The measured voltage amplitude value is 10 times greater or smaller than the actual value.

There is wave form displayed, but it is not stable.

No Display Responses to the Push-down of RUN/STOP.

After the AVERAGE value sampling is set in the ACQU MODE or the longer duration is set in the DISP MODE, the display rate is slowed down.It is a normal phenomenon.

Please do not store or keep the instrument in the place where the liquid crystal display will be directly exposed to the sunlight for a long time.

Caution: The instrument or probe should not be stained with the spraying agent, liquid and solvent to avoid any damage to it.

Check the probe and instrument regularly according to their operating state. Clean the external surface of the instrument following the steps shown below:

Warning: Before power on  for operation, it is required to confirm that the instrument has already been dried completely, avoiding any electrical short circuit or bodily injury resulting from the moisture. 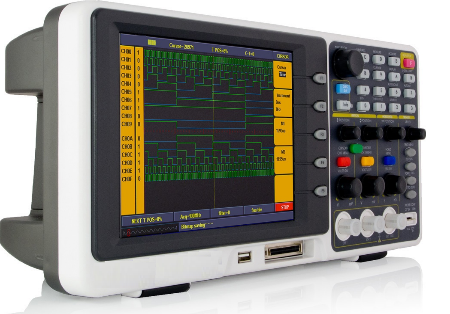