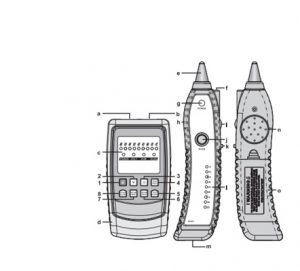 The cable tracing function helps users to isolate the cables that they want from a bundle (such as Internet cable, telephone cable, and video cable). There are two tracing modes. First mode is the default mode when the device is turned on. Second, press any button of the SCAN buttons, and switch back to the tracing mode from any other modes, the SCAN light lights at the same time. Plug one end of the wire into the transmitter’s RJ11/RJ45 interface directly or through the alligator clip. Press the SCAN button on the receiver; detect surrounding area of the other end of the cable (such as cable terminal, phone distribution frame, terminal box, computer network distribution frame). Comparing the sound level, the targeting cable has the loudest sound. In a noisy environment, if the sound is not very obvious, press any button of the SCAN buttons to switch the signal frequency, in order to identify if the sound signal is effective or not.

The Cable Order Verifying Function helps users to detect these characteristics such as open circuit, short circuit, and mis-wiring of the cable.

Press any button of TEST buttons to enter into the cable order verifying mode. OHM light lights, and the SCAN light flashes. Put one end of the testing cable into the RJ45 interface of the transmitter, plug the other end into the RJ45 interface of the receiver. Judge the condition of the wiring, based on the 8 indication lights on transmitter and receiver. When the cable is normal, the light would light in sequence. The cable order verifying function could test the condition of the shielding circuit (G), indicated by the 9th light. The cable order verifying function could be measured in either fast or slow mode.

Cable voltage test function is designed to inspect some basic attributes of the wiring, such as the existence and positive or negative characteristic of the voltage. This function only requires the transmitter. Press the V button; get into cable voltage test mode, VOLT light turns on. Plug the alligator clip into the RJ11 socket of the transmitter and clip the Red & Black clip to the measuring wiring or plug the RJ11 telephone line directly into the RJ11 interface. The OHM or SCAN light would light, if there is a phone line voltage. When the SCAN light lights, the red alligator clip connects the anode, on the other hand, it is cathode, when the OHM light lights. This product is designed for weak current, such as phone line, do NOT use for strong current, in case of electric shock and damage to the equipment.

It is designed to detect the telephone cable (not connected to the network) whether or not has shorts. Press the Ω button, and the OHM light lights. Plug the alligator clip into the RJ11 socket on the transmitter, clip the Red & Black clip to the measuring wiring, or directly plug into the transmitter, for the phone that has Crystal head. When the SCAN light lights, it indicates there is a short.

To prevent electric shock and personal injuries, please do not:

To avoid the damage to the device and detection, please pay attention to the following: 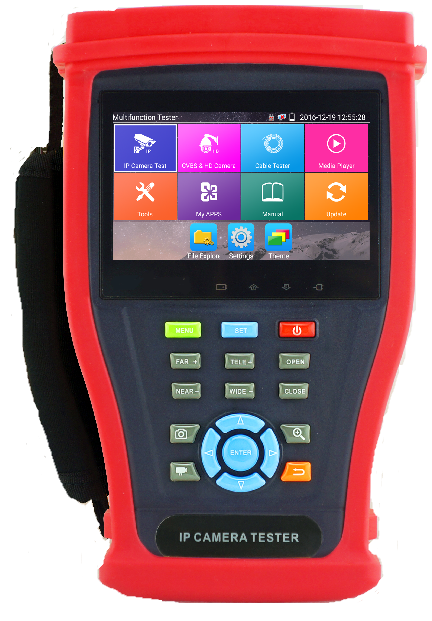