Everything You Need to Know About SFP Transceivers 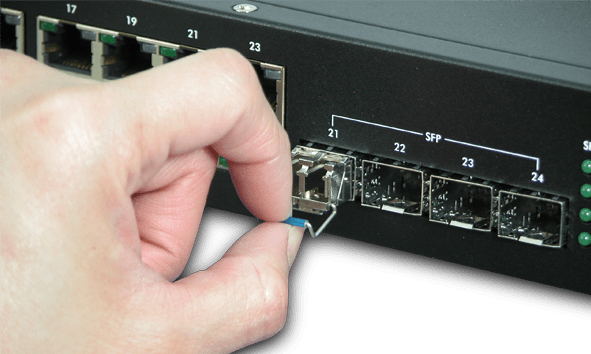 SFP is the short form of Small Form-factor Pluggable. It is a transceiver which we use widely in the field of networking and data communication. It is a hot pluggable and compact device and behaves as an interface between a networking device and its interconnecting cable. The cable could be a copper cable or it can be an optical fiber cable, it performs conversions between electrical and optical signals.

SFP supports many standards such as Ethernet, SONNET, Fiber Channel etc. it can allow transport of gigabit and other fast Ethernet LAN packets over time division multiplexing based WANs, also it can help in transmission of E1/T1 streams over packet switched networks. SFP is an upgraded version of GBIC module i.e. Gigabit interface converter that’s why it is also called mini GBIC, it has very similar functionality as GBIC transceiver but has much smaller dimensions. The SFP permits greater port density (number of transceivers per inch along the edge of a mother board) than the GBIC.

The form factor and electrical interface are specified by the multi-source agreement (MSA) under the auspices of the Small Form Factor Committee. It is a famous industry developed and supported by many network component vendors.

In markets, SFP have a wide range of devices which are easily detachable and can allow users to select the appropriate transceiver according to the required optical range for the network. Copper cable interfaces allow a host device designed primarily for fiber optic communications, for the purpose to communicate over unshielded twisted pair networking cables.

An enormous amount of change is expected in optical transceiver, each with different transmitter or receiver, this allows the client to customize and configure the transceiver to get the proper reach with either a multi mode fiber or single mode fiber type. The single form factor pluggable comes in different categories namely –SX, which is 850nm, LX, which is 1310nm, ZX, which is 1550nm and DWDM. These categories have an interface of a copper cable which allows a mother board to communicate via USTP (unshielded twisted pair) cable network.

The SFP has the transfer rate of approx. 4.25 Gbit/s while XFP, which is another form factor and very identical to SFP, increases this amount by three times i.e. 10Gbit/s.

In this article we will discuss various SFPs and how they are different from each other by comparing them and formulate a table.

All types of form factor pluggable devices are plugged into a special port on a switch or networking device, these transceivers used in various fields such as data communication and telecommunication.

Some of the pluggable transceivers are SFP, SFP+, XFP. XFP is a 10 GBit/s small form factor pluggable device, it usually operates at wavelengths of 850nm,1310nm or 1550nm. XFP also complies with the MSA agreement. SFP protocol specifications are based on IEEE802.3. SFP+ modules are smaller as compared with XFP and they comply with the protocol specification based on IEEE 802.3ae.

XFP which is a 10Gbit/s small form factor pluggable is a standard and doesn’t dependent on the protocol, it operates at wavelengths corresponding to 850nm, 1310nm, 1550nm. All XFP modules are hot swappable that’s means components can be replaced without shutting down the entire system.

SFP+ is an expansion of SFP standard, it can support speeds of 10Gbit/s or even higher. The modules under SFP+ includes copper cable assemblies and cages connectors. It is very similar to the performance requirements of SFF-8431 and also supports 8G fiber channel and 10G Ethernet applications. SFP+ has various benefits when compared with its competitors, it is a compact module than XFP and also the cost is also less than that of XFP.

Now that you know the different types of SFPs and how they differentiate from one another, browse our SFP Transceivers for the best selection!

Why Thickness Gauges Are Gaining Importance In Industrial Applications