GAOTek Cable Fault Locator is a completely automatic device which adopts ARM, FPGA and Dot Matrix Color LCD display technology. This tester combines the principles of time domain reflectometer’s (TDR) pulse reflection testing and intelligent bridge testing (Bridge) both for the measurement of the exact fault location. The device is efficient to measure various faults of the cables such as the broken line, cross faults, earthing, poor insulation and poor contact of the lead covered cables as well as plastic cables. The device can test almost all the telecom cables also.

It is an effective tool to reduce troubleshooting time, improve work efficiency and reduce labor intensity of line maintenance staff. It also can be used in line projects acceptance and inspection of electrical cables.

When the lines have faults, you should firstly use testing board, megameter or multimeter to find the character and serious degree of cable faults, so as to choose the most suitable testing mode.

The characters of telecom cable faults can be simply divided into the following several kinds:

The pulse testing is suitable for testing broken lines and low resistance crossed lines. Sometimes, the serious insulation can also use pulse testing. The pulse testing operation is direct-viewing, simple, no need the coordination of the other end, it is should be firstly used when testing.

The bridge testing can test the high-resistance bad insulation faults, but it needs to find a good line, moreover, it needs the coordination of the other end. The test preparatory work is also quite tedious. You should use the bridge method after confirming that the pulse testing can not test the fault.

During testing, it should firstly cut off the lines or equipment on both sides of the cable to be tested. Perform testing firstly in the equipment to fix the smallest segment of fault, and then carry on the repeated testing, on-the-spot to locate the precise fault point.

You can locate the precise location of a fault on the basis of the testing results and the comparison of map data. When the map material is not entire or contains errors, you can estimate the approximate position of the fault according to the grasped cable situation. Then you can combine with the around environment to analyze the fault reasons until finding the cable fault. For example, there is a joint in the estimated range; it can approximately judge that the fault is in the joint. The further the range is, the bigger the testing errors are.

Pulse testing is a kind of remote testing method; one can locate the fault point without testing on the field or testing with end-to-end coordination. The principle of the theory is:

The instrument emits a pulse to the line, when the line has faults, the pulse reflection will change. If the come and back time can be measured, the location of the fault point can be detected.

Suppose the pulse transmission velocity in electric cable velocity is V, the come and back time that the pulse travels between the test point and the fault point is T, the fault distance is L, then:

For example, the sending end transmits a pulse to the cable, after 20μs, the sending end get the reflection pulse. If the pulse transmission velocity in the electric cable is 201 m/μs, the fault distance L is

To insure the accuracy of the testing of fault point, the testing personnel shall diagnose the fault characters correctly and then choose the most suitable testing mode. The characters of telecom cable faults can be simply divided into the following several kinds:

One or many cable core line are broken.

The insulating resistance between the different couple of lines drops and causes the communication amplitude drops.

When the cable core insulation material is invaded by water or humidity, the insulating resistance will drop and cause low communication quality or even blocks.

The insulating resistance between different couples of lines and the core drops to a very low level, the communication quality comes under serious influences.

The tester will Judge the approximate location based on the test result, then check the cable, cable gland, cross boxes, etc., depending on the actual situation.

Press “on”, connect the testing lead line and fault cable line. Press “Auto” and then the instrument will show the testing result.

Note: The default setting wave velocity is 200 m/μs, when you perform intelligence testing, the user shall check whether need to adjust the velocity (see “Adjust wave velocity” in the next section).

(a) Gain– Press “Adjust” , until “Gain xx” shows reverse color display. Then press “◄” or “►” to adjust the amplitude (1~99 adjustable), press “Pulse“, the screen will display the wave after gain adjustment.

(b) Range– During manual testing, Range decides the maximum testing distance of the instrument, so the range value shall be chosen as longer than actual length of the cable to be tested. To adjust the Range, repeatedly press “Range”, until “Range xx” shows reverse color display. Press “◄” or “►” to adjust the Range.

Adjust the Range and Wave Velocity according to the characters and estimated length of the cable to be tested. Appropriately adjust the wave amplitude to make the waveforms on the display screen to be observed easily. Move the cursor to the inflection of the reflected waveform. The fault distance will demonstrate on the underneath of the display screen.

Intelligent Bridge Testing – The fault resistance of bad insulation is very high (above several thousand ohms) and is much bigger than the characteristic impedance of the cable; the pulse reflection is weak and is not easy to judge the fault point. At this time it needs to carry on bridge testing. The bridge testing in this instrument also has the simple megameter and the ohm meter functions.

As we know, there are certain resistances in the cable core line and resistance value in the unit length is same. Suppose the resistance of entire core is R, if you can test the core resistance from the fault to one end (test point) is Ra, and the core accurate length L is known, suppose the fault distance is La. Then:

The core line resistance will be affected by changing temperature and different line diameter, but these influences are same in the cable span. Use the Ra/R ratio calculation method can eliminate these influences.

During testing, firstly, the instrument calculates Ra/R automatically, and then input some data manually to calculate La. This instrument adopts the intelligent electric bridge technology, so the user only needs to connect lines, input data and the length of partial line diameter;  press “Auto”, and the fault distance will be calculated.

If the wiring has no mistake, press “manual”, the instrument starts to test.

The instrument test line insulation resistance and loop resistance firstly. As shown at the top of the screen.

If there is no short connection on the coordinate end, then it demonstrats the insulation resistance value and “no loop” of the red and yellow clips to the black clip. By now it needs to inspect whether the wiring is correct or not, then test again.

If the wiring is correct, the testing will carry on continuously, and finally obtain the ratio value of fault distance and cable length. Next, input cable span to get the fault distance. The entire test procedure probably needs one minute.

For example, the known length of the testing, fault section 0.61 mi (986 m), after testing, according to the following step input:

The instrument will automatically calculate the fault distance during the data inputting. 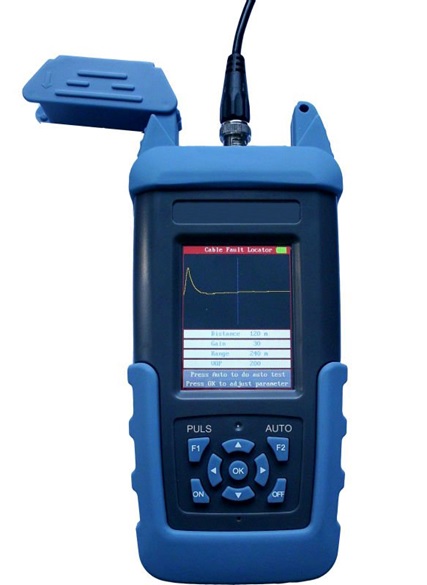